- Dan performed a drum solo during the extended bridge of 'Sorry For Now' before Mike rapped his verse of 'Lift Off'. Mike messed up the lyrics in the second half of the verse. This is the first time 'Lift Off' has been played live in any form.

- Mike played a bit of the 'Where'd You Go' piano after the 'Waiting For The End' singalong for the first time.

- Before 'In The End', Mike told a story from one of the first "real tours" the band had gone on. He talked about how the headlining act was rude towards the opening acts and their crew and how it taught the band to really take care of their openers. Mike went on to talk about their show at 2001.02.21 New York City, New York and how one of the band members from the aforementioned unnamed band came backstage at that show and told the band that Linkin Park's success should have been theirs. Chester responded in a very chill manner, which Mike commended him for.

- A fan named David was brought on stage to do backing vocals on 'Papercut'. He later did additional vocals on the 'Bleed It Out' part of the 'Good Goodbye/Bleed It Out' mashup. He was originally meant to come out and play guitar on 'Roads Untraveled', but Mike forgot to call him out. Jim Digby walked out on stage to remind Mike, but it was already too late.

- 'World's On Fire' was played live for the first time ever. During the bridge, Dan performed a drum solo and Mike played the synth part of 'Robot Boy'.

- This was the first time 'Lift Off' was performed live in any form.

- This was the first time 'World's On Fire' was played live.

- Before the show, Mike and the band performed a soundcheck, rehearsing 'Crossing A Line', 'World's On Fire', and 'In Stereo'. A shortened version of 'Dedicated', 'Sharp Edges' with Matt on vocals, 'High Road', and 'Until It Breaks' were also performed despite them not being played at the show. An unknown, potentially new, song was also played.

Location: Against barricade, slightly to the right of the stage

Comments: Full source uploaded to YouTube the night of the show. Includes soundcheck footage of 'Dedicated' and part of the unknown song. Released on LPLive on November 4, 2018. 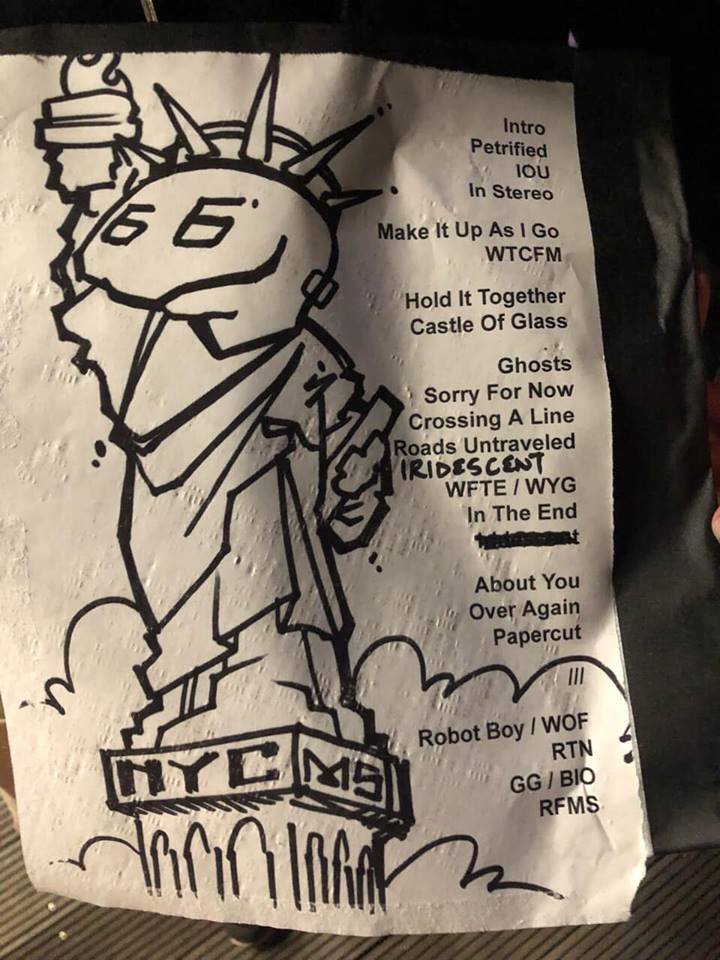