- The order of the setlist completely changed at this show, notable changes including 'I.O.U.' being performed third and for the first time outside of the encore, 'Sorry For Now' and 'Crossing A Line' being moved up in the set, and 'Castle Of Glass' in the encore for the first time.

- Mike played around with the vocal samples of 'Hold It Together' before the song started.

- 'Wisdom, Justice, And Love' was performed as an instrumental as Mike spoke about the Russian fans, speaking specifically about the "Wisdom," "Justice," and "Love" flashmob from the 2011.08.23 Transformers 3 Premiere.

- After 'Make It Up As I Go,' Mike revealed that they were working on a music video for the song.

- This was the first time Mike performed 'Wisdom, Justice, And Love,' 'Iridescent,' and 'Cigarettes' on the tour.

- This was the first time a piano version of 'Iridescent' was performed.

- Five songs from this show were released as "Soundcheck Session: Live in Moscow" on November 15, 2018. The video release, exclusive to Apple Music, included 'Make It Up As I Go', 'Crossing A Line', 'Roads Untraveled', 'In The End', and 'Numb' spliced with interview footage from Mike. The audio of the first three songs is from the soundcheck before the show (crowd noise was added in the mixing), whereas 'In The End' and 'Numb' are from the actual show.

Comments: Released November 15, 2018 as "Mike Shinoda Soundcheck Session: Live In Moscow". Five songs only - 'Make It Up As I Go', 'Crossing A Line', 'Roads Untraveled', 'In The End', and 'Numb'. Includes interview footage. Audio from the first three songs is from the show's soundcheck with crowd noise added in later.

Comments: Uploaded to YouTube the day of the show.

Comments: Tracked by smores. Shared on DIME after the show. 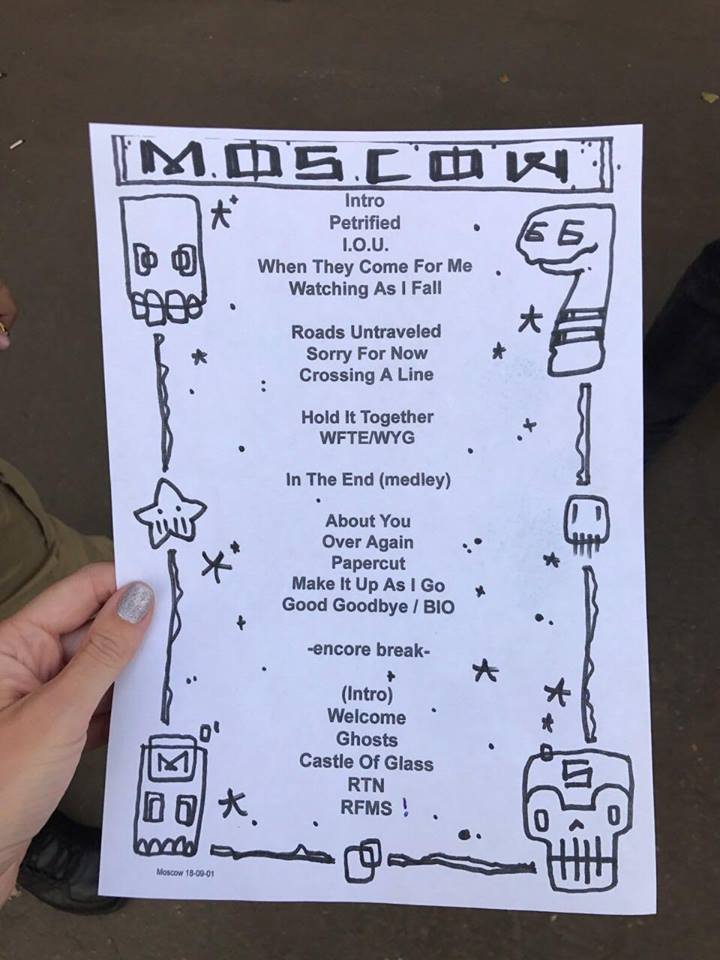