- Until January 2022, this setlist read: "With You", "Runaway", "Papercut", "Points Of Authority", "And One", "Step Up", "Crawling", "Pushing Me Away", "Forgotten", "A Place For My Head", "In The End", Encore: "My December", "Joe Hahn Solo", "By Myself", and "One Step Closer." The middle of the setlist was corrected when a trader with the audience recording confirmed the order of songs to us.

- Puddle Of Mudd singer Wes came out on 'One Step Closer'.

- This was the first of two times that Chester performed 'Karma Killer' with Cyclefly.

- Due to high demand, the show was moved from the E-Werk to the Palladium.

Comments: Uncirculated. Confirmed to be only in mp3. A few traders have this show, and it has remained almost completely uncirculated since 2001. Sound quality is good. 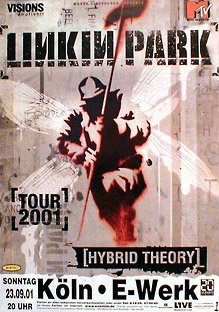