- For the setlist for this show, the band played the entire Hybrid Theory album minus 'Cure For The Itch' and added in 'High Voltage'. There was no encore break.

- Instead of a show intro, Joe just started scratching to start the show and it went into 'With You'.

- This was a special, private show put on by BBC Radio 1 and Kerrang! - only 75 pairs of tickets were given out. In the end, around 80-100 people showed up. A lot of people didn't attend because they were outside of London and the public transportation system in the region was messed up after 9/11.

Comments: Broadcasted on September 17, 2001. Full show and includes an Intro w/ commentary before 'With You'. 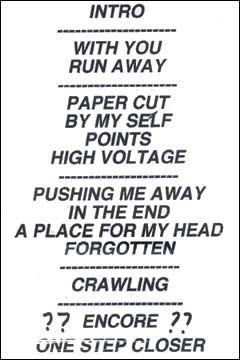