- This is the first confirmed show on this tour that we know of where 'Crawling' was dropped for 'Pushing Me Away'. 'Crawling' was played at the first two shows in Madrid and San Sebastian but due to the Montpellier recording being incomplete, we don't know if it made it to the fourth show or not. Sometime in between San Sebastian and this show is when it was dropped (either Barcelona or Montpellier). Prior to September 2018 when this setlist was added, we thought 'Crawling' could have made it to Milano and Wien, but we now know that it did not.

- This was Linkin Park's first show in Italy.

- This setlist was added in September 2018 thanks to LP Italy.

- Taproot did not perform at this show for an unknown reason. 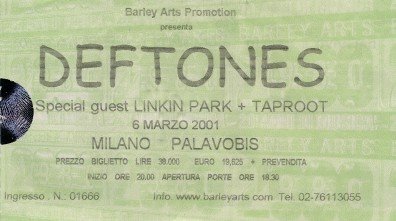