Taproot, Styles Of Beyond

- Ryu and Tak from Styles Of Beyond came out and sang on 'Points Of Authority' from after the second chorus until the end of the song.

- This is the first known time that Chester used the vocal delay on 'High Voltage' live. It is unclear why he did not continue using it throughout 2001.

- Chester sang the demo lyrics "Fear is powerful" during the chorus of 'Crawling'.

- 'In The End' was aborted and restarted. A Yahoo press piece in 2001 explains it: "Five songs into an ecstatic set at the historic Fillmore Auditorium in San Francisco, Linkin Park launches into "In The End." Something's not quite right. "Stop, stop, stop," vocalist Mike Shinoda orders. The crowd is shocked. "You guys are kicking our ass, and that wasn't right," he admits. "We want to live up to your standards."

The six-member band reloads and then kicks the tune up a notch. A couple weeks later, singer Chester Bennington explains, "We know how well we can play and we know what people hear. We try to match that as much as possible live. I'd say about 90 percent of the time we do; there's about 10 percent of the time that we don't, and we hate that. So it was cool for him to do that."

Apparently, that's not the first time the band has taken that approach. "There was this one time when the crowd started the song and they were so on. We skipped a beat and I stopped it, too. I said, 'This is about as punk-rock as we get, so we're going to start the song over.' We try to maintain a level of quality in our set.""

- Stephen Richards from Taproot came out and sang on 'A Place For My Head' from the bridge until the end of the song.

- The band stayed after the show and signed autographs for every fan that they could. Security was kicking people out because it was so late and the band kept signing until the last one was made to leave.

- A digital capture of the Fillmore documentary broadcast by Swedish channel ZTV was released on linkin-inside.

Comments: Included in the 20th Anniversary Edition of Hybrid Theory.

Comments: A documentary about the band playing in San Francisco, including full live-performances of 'With You' and 'One Step Closer'. First 3 minutes missing. 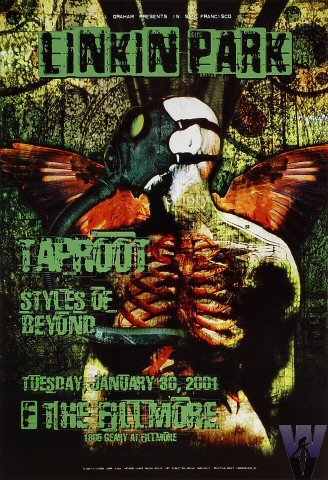