- This date was discovered in January 2018 when researching Hybrid Theory (band) dates.

- Reportedly, almost no one came to the show. The band took a long time to get prepared to play and ran way into their set time. The promoter told them to end their set and the band refused, so the promoter cut the sound and the band continued playing with the power to the PA off.

- According to a different report, the band had technical problems with instruments and microphones during the show. Chester got so pissed, he threw his mic and left the stage, but Mike rushed after him promising everything will get fixed.

- According to a member of the band Size 5, Hybrid Theory opened for Size 5 that night. The band consisted of Jay and John Kereny (Lemon Krayola), Barton Applewhite (Kongo Shock) and Chuck Moore - close friends of Chester and Grey Daze. Size 5 also served as Chester's backing band for his pre-production live session when he was preparing himself to record his audition tape for Xero. The band was also thanked by Chester in Hybrid Theory booklet.

- According to a concert listing from Arizona Republic's August 26th, 1999 issue, the band PHD were the headlining act for the night. 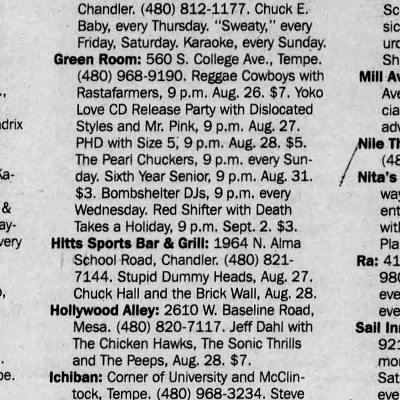