- Mike performed a similar setlist to the one he played in 2018.09.01 Moscow. 'Watching As I Fall' was on the setlist after 'When They Come For Me' but was not performed.

- Matt and Dan left the stage before 'Heavy' and returned halfway through 'Over Again.'

- After seeing her Instagram cover of 'Numb,' Mike invited fan Josie Stickdorn to perform with him. Mike left the stage while she performed her acoustic fingerstyle version of 'Numb.' They also performed 'In The End' together, with Mike performing 'In The End' in its original key for the first time on the tour.

- Despite not being written on the physical setlist, Mike performed 'Kenji' after a request by the fans in the front row. This was the second show in a row where it was added to the encore due to a fan request.

- Mike performed at Stadthalle Offenbach on September 9th. This show was added just after Post Traumatic debuted at #2 on the German charts.

- When he announced this show, Mike was in Köln, Germany. After a livestream on Instagram, he placed several drawings that he had just done, including the one for the show announcement, around Köln at Offermann, outside Fitness First Club Köln at DuMonte Carre, inside the Carre D'Artistes Deutschland art gallery, and outside the Vodafone Shop Köln on Breite Street. 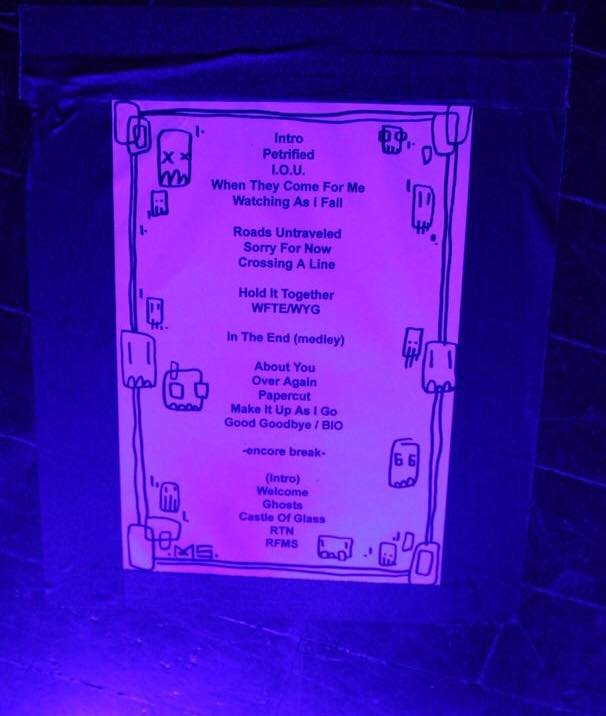