- Similar to the show in Summer Sonic Tokyo the previous weekend, Mike performed in front of a backdrop that had the cover of Post Traumatic on it.

- During the intro of 'In The End,' Mike spoke about the nature of him getting onstage and doing this tour. "Getting up here and doing this is really fulfilling and really an accomplishment just to get over my own anxiety about doing it again, and I have to be honest, I'm really indebted to you guys for helping me get here. I don't think I would be able to get out here and do these without you guys. In doing the shows... the last time we played here was 2003? Honestly it feels like the first time I've ever played. Since the beginning of the band, we've always done meet and greets and seen fans before the shows, and one thing that's been consistent is fans telling me how they relate to a song or how what we did intersected with their life. One thing I've been hearing quite a bit is how you guys are going through some things, and how the connection to the music helps you get through it. With that said, I know there are some people who want to come and there are other people who are still hurting and have stuff going on. And I want you guys to know, if that's you, don't be ashamed of that."

- There was a moshpit during 'Over Again.'

- Mike sang the chorus of 'Good Goodbye' instead of the 'Bleed It Out' chorus during the mashup of the two songs.

- Mike performed on the Main Stage at Reading on August 25th. The last time Mike performed there was in 2005 with Fort Minor (despite him saying during the show that he last played there in 2003 - that was with Linkin Park).

- Mike joined Sum 41 onstage later on in the day for their cover of Linkin Park's 'Faint.' 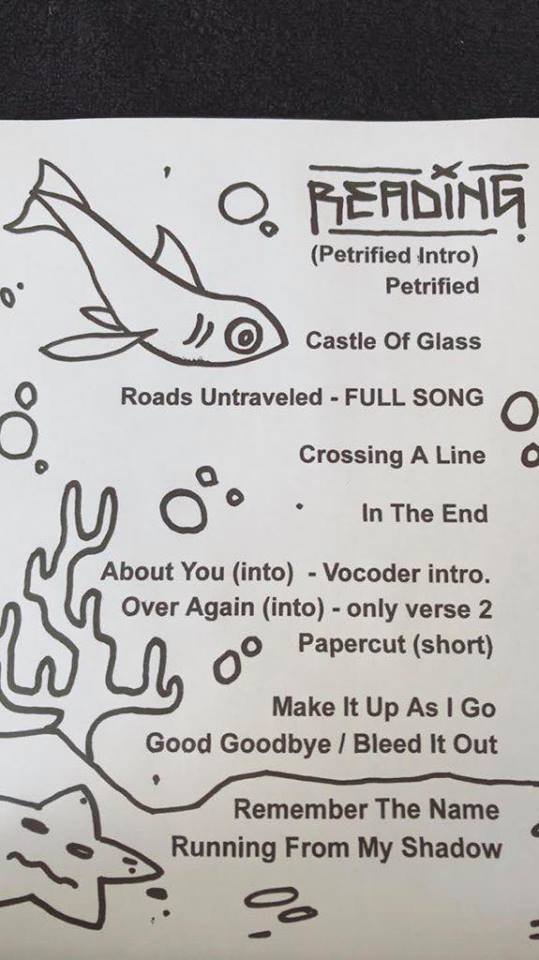