- Mike debuted a new setlist at this show. 'Place To Start,' 'Kenji,' and 'Ghosts' were dropped.

- Mike was late to his keyboard for his synth solo on 'Hold It Together' during the bridge because he was pumped up about the song.

- During the piano intro of 'In The End,' Mike discussed the start of the tour: "When I first went out by myself... part of the reason I did it that way was because I knew I would feel really anxious about it, so I wanted to make it as weird as possible for myself... It was part of the thing that helped me get comfortable getting up here. The other part is obviously you guys."

- 'High Road' was performed for the first time since 2015.09.08 London, and was requested before the show by long time tour manager Jim Digby.

- This was the first time that 'Hold It Together' was performed live.

- Before the show, Mike and the band performed a soundcheck, rehearsing 'Hold It Together' and 'High Road' multiple times. A partial version of 'Watching As I Fall' and 'Ghosts' were also played, despite the latter not being performed at the show.

Location: To the right of the stage, near the front

Comments: Uploaded songs separately to YouTube on the day after the show. Missing 'Castle Of Glass,' 'When They Come For Me,' 'About You,' 'Over Again,' and 'Papercut.'

Location: Center, near the front. 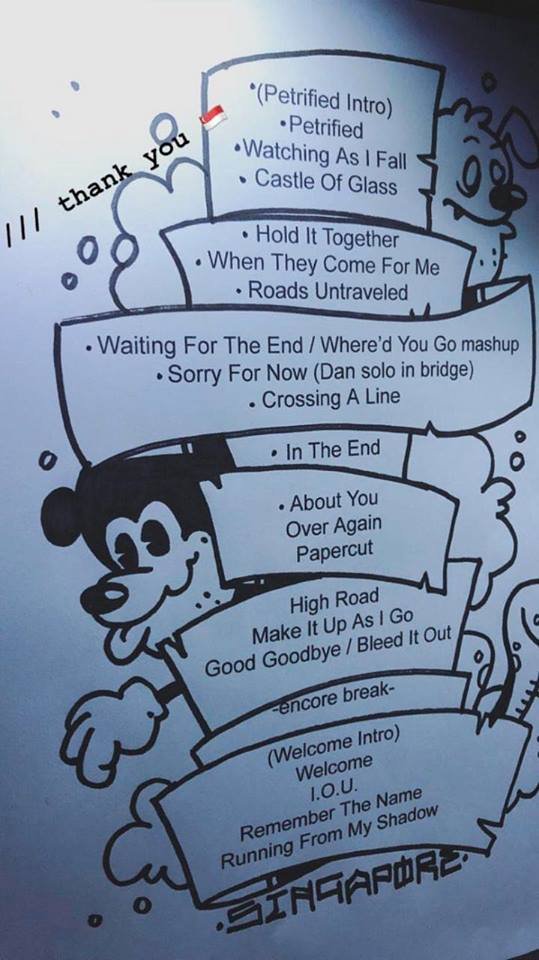