- Due to China's strict censorship rule, several songs had to be censored. This affected songs are: 'Welcome,' 'Watching As I Fall,' 'When They Come For Me,' 'About You,' 'Over Again,' 'Make It Up As I Go,' 'Bleed It Out,' 'Petrified,' and 'Remember The Name.'

- Before 'Castle Of Glass,' Mike spoke to the crowd about the tour: “One of the reasons I wanted to come do this tour was because I wanted to come in person and stay thank you to the fans for their support."

- There were some technical difficulties after 'When They Come For Me.' Mike talked a bit to the crowd while the crew fixed things onstage, joking around saying: "We're taping our mic's together."

- Mike wore a panda hat that he got from the crowd during 'Ghosts.'

- Mike shoutout out LPLive during the extended intro of 'Ghosts': “Is LPLive in the house? I was explaining to Matt and Dan that we have fans that are very avid and catalogue all the different things that happen during shows, and that if you mess up or if you do something different, and they said ‘Oh no’ - and I said, ‘No, no, it shows that they care! Mistakes happen, and that’s okay.’ For me, that’s one of the things that makes playing live shows so fun. Even if we’re doing the same set with Linkin Park for months, it would be fun to do little things that were different.” Thanks, Mike!

- Mike rapped the third verse of 'Until It Breaks' over the extended intro of 'Kenji' for the first time, prefacing it with "- “It’s really too bad that I kind of spoiled the surprise on this guy… I actually worked on a little verse that I haven’t done in awhile.” This is the first time since 2017.10.27 Los Angeles that the verse was used, that time being rapped during the Apaches Intro of 'Waiting For The End.' The 'Hands Held High' verse that was originally performed during the extended intro had to be dropped due to the song not getting approved by the Chinese government for its political message. 'Hands Held High' was previously banned by the government when Linkin Park performed in China in 2009.

- Mike played a short piano outro to the 'Waiting For The End' and 'Where'd You Go' mashup. It seems like it was a mistake,but Mike styled it out with a little improv.

- 'Crossing A Line' was dropped, likely due to political restrictions.

- Mike talked about an experience he had the day before during the piano intro of 'In The End': "I was getting out of a car yesterday and the driver of the car said 'I love you.' I want you to know that one of the guys from the crew looked and me and kind of laughed because in America, people usually don't just say 'I love you' like that... But for some reason, people in the United States, they don't just say to someone who's kind of a stranger, 'I love you.' So I want you to know, that I think that's really special. I don't even have to guess that that's a story I will tell to people when I get back to the U.S."

- He continued about the band and Chester: "It made me think, though, that one group of friends in my life that I never felt like those words were missing, I always felt like we said that enough, was in the band. That goes for Chester, especially. Chester was somebody who would tell you often and with 100% sincerity when he said 'I love you.' Maybe in his heart, Chester was Chinese. I wanted to share that moment with you guys because in this part of the set, there's a chance that people feel really heavy emotions if you talk about Chester. I was actually speaking to Matt about that, and I said 'I hope I'm not being insensitive by making this moment too celebratory or upbeat' because I don't want to disrespect anybody who is feeling any intense emotions. And he said, 'Don't worry about that, because I think the people who feel the heavy emotions, it is completely valid, especially in this space...'"

- Mike messed up the intro to 'In The End' and did a little improvisation.

- Mike led the crowd in a 'Faint' acapella after 'Petrified,' citing the fans singing in Beijing as an inspiration to do so: "Let’s do something crazy… I don’t even know why I decided to do this. I think it’s because at the last show, everyone was singing and I thought, ‘I wonder if we can do this at the show.'" This is the first time since 2017.10.27 Los Angeles that the song was performed in any form.

- This is the first confirmed show where 'Running From My Shadow' had an extended outro. It's possible it was performed in Biejing, but no video of the song being played there exists.

- Before the show, fans outside the venue sang 'One More Light' for Chester (watch here).

Location: Middle of the crowd, right side of the stage

Comments: Cut into two separate parts. Uploaded to Youku the day after the show. (1 / 2) 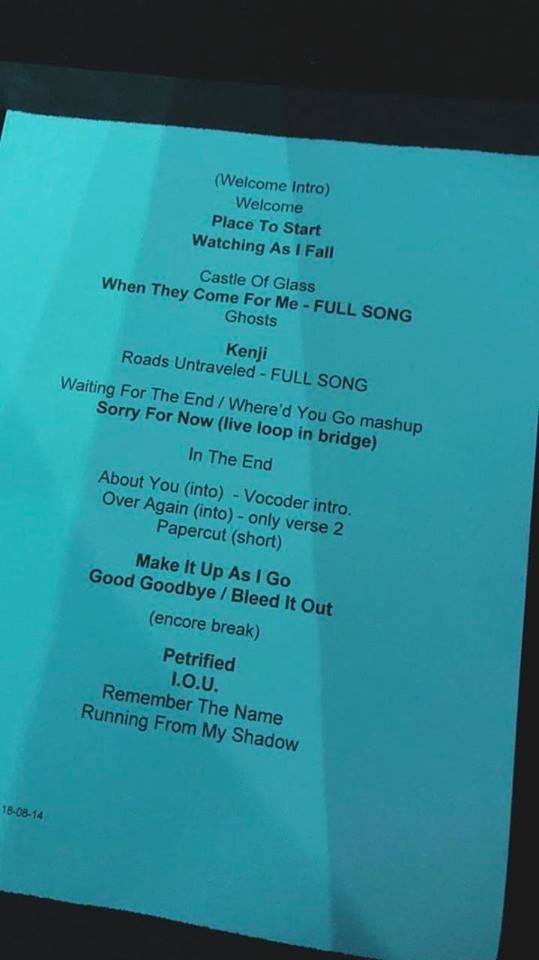