- Due to China's strict censorship rule, several songs had to be censored. This affected songs are: 'Welcome,' 'Watching As I Fall,' 'When They Come For Me,' 'About You,' 'Over Again,' 'Make It Up As I Go,' 'Petrified,' and 'Remember The Name.'

- Before 'Ghosts,' Mike spoke about the bittersweet process of Post Traumatic: "I never wanted to make this record... About a year ago I was sitting at my breakfast table and I was realizing that I hadn't gone into my home studio and made any music in months. I realized that the longer I waited, the more difficult it would be, so I went in and started playing with stuff and started jamming, and the jamming turned into songs, and songs turned into the album. One of the things about the album is that it goes from a place that is that dark and goes to a place that's more hopeful."

- Mike rapped verse one and half of verse two of 'It's Goin' Down' over the intro of 'Kenji.' Halfway through the intro, Mike got tripped up by the crowd clapping and laughed it off, going straight into 'Kenji.' This is the first time since 2017.06.27 Sopron, Hungary that the song was performed, when Mike rapped verse one of the ending of 'Castle Of Glass.' The 'Hands Held High' verse that was originally performed during the extended intro had to be dropped due to the song not getting approved by the Chinese government for its political message. 'Hands Held High' was previously banned by the government when Linkin Park performed in China in 2009.

- 'Crossing A Line' was dropped, likely due to political restrictions.

- Mike talked about his band and Linkin Park before 'In The End': "By the way, just because these guys are up here with me, I dont want you to think Ive forgotten about my band mates in Linkin Park - I love those guys. I LOVE those guys... I'm grateful that I've got friends that will support me in that way. That's one of the reasons I wrote certain songs on the record in certain ways: because I wanted them to know I care about them. On that note, can we make some noise for Chester Bennington, please?"

- Mike continued, speaking about Chester: "One thing that distinguished me from him was that... I started the band with a friend of mine named Mark Wakefield - a friend from high school - and we would make music in my bedroom in my parents' house... Fast forward to the band becoming Linkin Park, it was always the case that I was never the guy who wanted to be up here in the spotlight. I didn't dislike it... but Chester was a guy who grew up knowing he wanted to be a rockstar... He was born to do it."

- Because of censorship restrictions with 'Bleed It Out,' Mike dropped the mashup and instead performed the 2017 Live Version of 'Good Goodbye,' featuring the live verse and chorus instead of the 'Bleed It Out' verse and chorus. This was the first time since 2017.07.06 Birmingham (the last show of the One More Light European Tour) that this version of 'Good Goodbye' was performed.

- This was the first time Mike performed the live version of 'Good Goodbye' in his set.

- The Chinese fans stayed at the venue for almost an hour singing Linkin Park songs. Mike later posted on Instagram that the venue had to ask the crew to ask the fans to leave. In an interview on the fall tour, Mike said, "There was a show in China on the last tour where I played 100 minutes and left the building after the show was over. I got a text from the production manager 15 minutes later that said a third of the venue was still in there singing Linkin Park songs. They weren’t waiting for an encore. They were just enjoying being together and singing. He texted 30 minutes later and said, “They’re still in here. We’ve broken down all the gear. The venue is asking what do we do to get these kids out of here.” The fans walked out singing."

Location: Right side of the stage

Comments: Lots of cuts, missing parts of many songs. Uploaded to Youku a week after the show. Missing everything after 'Papercut.' (Watch) 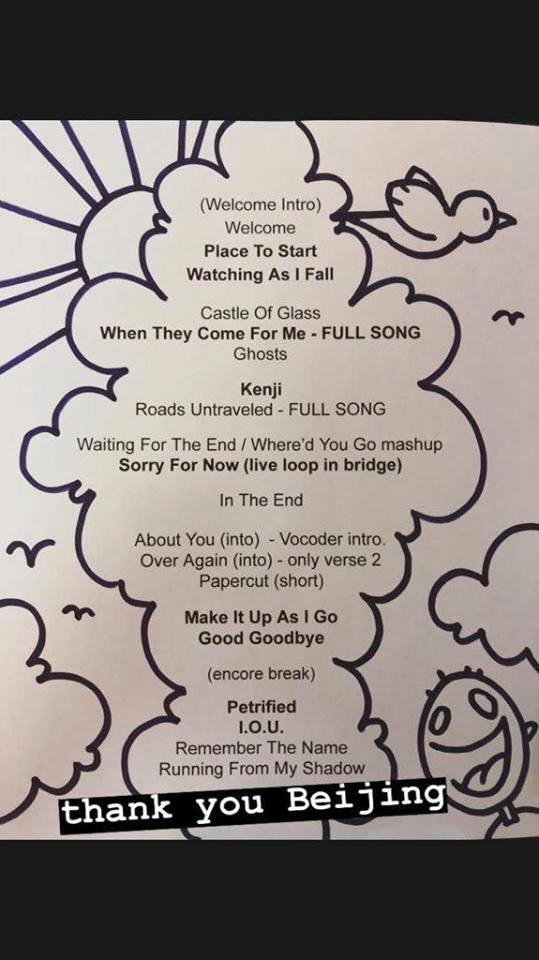