- 'Ghosts' was performed with a new extended intro featuring Matt on piano. Mike talked about a conversation with their production manager Jim Digby: "I was joking with Jim who's been our production manager for maybe 15 or more years - have you been to a Linkin Park show before? If you have, you've been to one I've done with Jim - but I was like, I didn't think of anything to say tonight, and sometimes I have something I really want to get out, and Jim said, 'Don't worry, you always figure it out...' I'm still at a point with being onstage in this way, where it's all still really new. Which is weird, having done this for so long, to be able to get up here and feel nervous and there being parts where I know what I'm doing but I don't know what I'm doing. That's special." He also talked about all the times he's been in Bangkok, including the Fort Minor show with 50 Cent, to which he joked, "I mean, it's 50 Cent. I think that's a really weird mix. I am not the most gangster rapper out there. I mean, I'm the second most gangster, right?"

- Before the 'Waiting For The End' and 'Where'd You Go' mashup, Mike asked the crowd about the masks with googly eyes on his face in the crowd and told a story about his "big anime eyes."

- Dan performed a drum solo during the extended bridge of 'Sorry For Now' for the first time. When lowering the high pass filter on the song, Mike said to Dan: "Let's do that thing we tried earlier." Mike accidentally messed up the live loop so the backing of the song (vocals, backing instrumental) carried into the final verse before Mike ran up and fixed it.

- Mike started talking about how much he loves Thailand - and its food - during the piano intro of 'In The End.' He joked, "If we cut like five songs and leave early, it's because I got hungry."

- Mike on Chester before 'In The End': "There was a part of me that when putting the set together, I wasn't sure if there were certain songs that would be too emotional... and I reminded myself that there are times when we need to take that energy and we need to turn it into something that recharges us and powers us... I grew up going to this festival... called the Obon Festival. The Obon Festival is a festival to celebrate the people who have passed away. To celebrate them. When I was a kid, I didn't really know what that was for - I basically went there to play the carnival games... I appreciate the fact that we went, I appreciate the idea of what it is, that it was for the people we loved, and that we should celebrate them, and not let it be a sad thing, but let it be a joyful thing. Can we make it a joyful thing here? Can we make some noise for Chester Bennington, please?"

- After the crowd did a Chester chant, Mike continued: "Don't you let anyone forget, Chester Bennington was one of the greatest rock singers of all time. I don't I even recognized that - I just thought my friend was a fucking awesome singer! So let's celebrate Chester right now, I want you guys to sing so loud that he can hear you."

- Unlike previous shows, Mike played the final key notes of 'In The End.'

- 'Introduction' and 'Petrified' were added to the setlist to open the encore. This was the first time since 2015.09.08 London that the full versions of both songs were performed (during Fort Minor sets), 'Introduction' being a newly remixed version and 'Petrified' being structured a bit differently. It was also the first time since 2017.07.06 Birmingham that 'Petrified' appeared in a set in any form (the first verse of 'Petrified' was rapped over the ending of 'Castle Of Glass'). Dan and Matt were not onstage for the song, possibly because they haven't had time to rehearse it. Mike rapped the first verse of the song early, when the beat dropped, and instead of doing the normal bridge he did the outro on the bridge.

- This was the first time Dan performed a drum solo.

- A newly remixed version of 'Introduction' was performed.

- A newly structured version of 'Petrified' was performed.

- During the show, fans could enter to win one of about six custom drawings Mike did earlier in the day at the Warner Music booth. 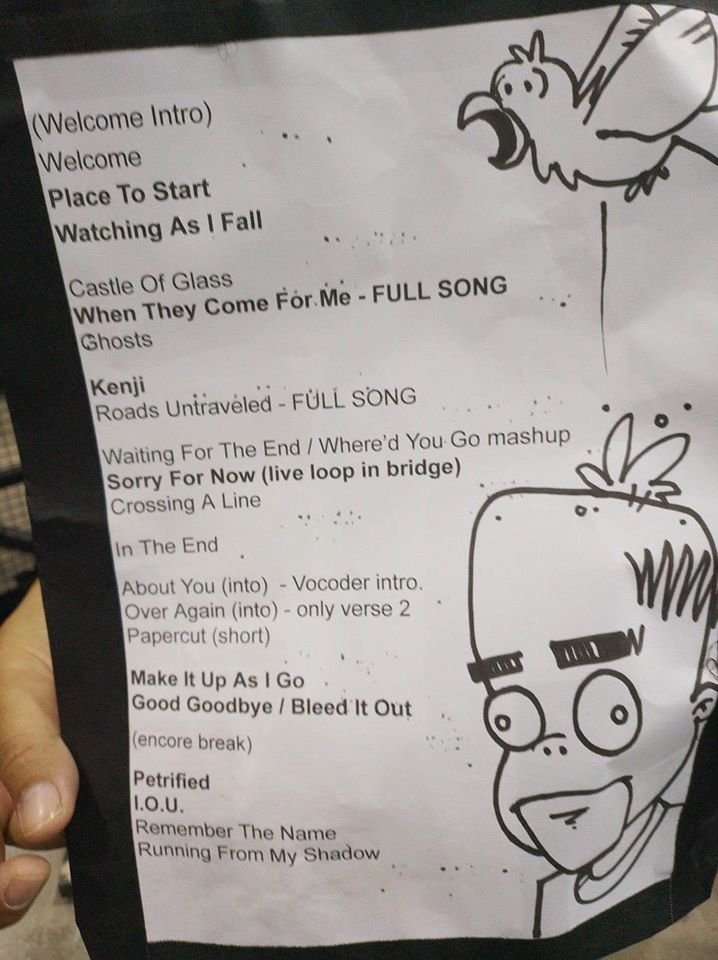