- Due to a lot of gear being fried (see Other Notes), certain guitar effects and keyboards were unable to be used at the show.

- 'Place To Start' had new extended outro featuring a synth solo by Mike.

- New guitar parts were added to the piano version of 'Castle Of Glass.'

- Mike debuted the full version of 'When They Come For Me' at this show, adding in the bridge and ending. This was the first full performance of the song since 2014.01.10 Las Vegas. Mike performed a new guitar part during the additional parts - the first time he's ever played guitar on the song.

- Before 'Ghosts' Mike was joking with the fans, writing a song called 'Fucking Awesome' with them. It went like this: "Hong Kong is... fucking awesome!"

- 'Kenji' was performed with a new extended intro.

- Mike rapped the demo verse of 'Sorry For Now' over the extended bridge.

- After messing around with it during soundchecks, Mike finally used the drum pads on the left keyboard during the bridge of 'Crossing A Line.'

- Mike gave a speech about Chester before 'In The End.' While playing some piano chords, he said: "I don't think it'll ever feel right to ever skip this song or this moment without acknowledging Chester... In terms of the type of the show I want to do, I don't want to have a sad show. The album is called Post Traumatic; it's not called 'Traumatic.' The 'Post' means we're passed something and looking to the future, and seeing where that journey takes us - and I don't know where it goes... I remember the first time I met Chester, he was like 115 pounds and he had these nerdy glasses. He looked like the guy that was a nerd in spite of the fact that he didn't get good grades. And I loved that about him... He was such a good dude."

- After the second chorus of 'Over Again,' Mike transitioned into a shortened version of 'Papercut,' where he rapped the first verse, chorus, bridge, and ending before going back into the end of 'Over Again.’ With the guitar part of 'Papercut' now added in, the song was essentially performed as the studio version with Mike's added vocoder part. Matt added backing vocals to the end. This was only the second time the song has ever been performed with those extra backing vocals at the end - the only time before was in 2017.10.27 Los Angeles, when Jon Green did them.

- Mike played guitar on 'Make It Up As I Go' for the first time.

- The 'Good Goodbye' and 'Bleed It Out' mashup featured a new guitar part.

- This was the first full performance of 'Roads Untraveled' ever. The version Mike was playing prior to this show was performed without the guitar refrain before the first chorus. When Linkin Park performed the song for the first time (at the 2017.10.27 Hollywood Bowl show), they also performed a shortened version.

- This was the first solo career headlining show Mike announced for the Post Traumatic Tour.

- This was the first Mike Shinoda show performed outside the United States.

- This was the first Mike Shinoda show performed in Asia.

- This was the first show to feature new members of the touring band: Dan Mayo on drums and Matthias Harris on guitar, keyboards, and backing vocals.

- After the show, Mike called into KROQ's Kevin and Bean show to discuss the performance. He said that the show was almost canceled at the last minute. The day before the show, he and the band held a rehearsal at a local studio but due to power supply issues, they fried three keyboards and some guitar gear. Mike said the show in Hong Kong was improvised at times, but they made it work without canceling. 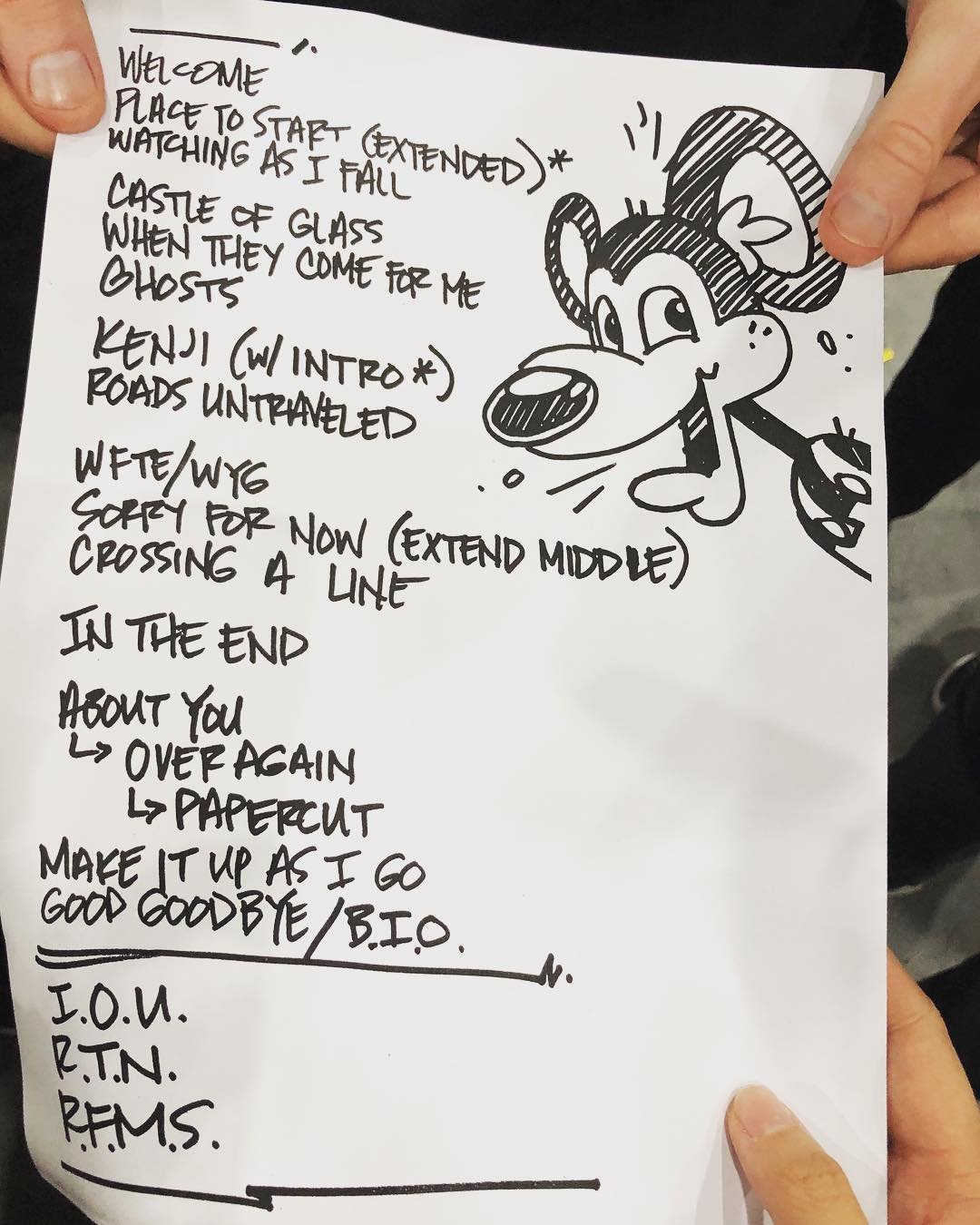