- Mike hyped up the crowd before coming onstage during the extended intro of 'Welcome.'

- At the start of 'Castle Of Glass,' fans kept shouting 'Kenji,' which prompted Mike to say, "It's not time for that yet... unless you're just calling me by my middle name."

- Mike gave a speech about seeing all of the negativity from social media and why he doesn't talk about politics much, stating, "I always feel there's something worse just around the corner." He discussed the Parkland survivors he met the day before on Jimmy Fallon's show and the interaction they had, summing it up with: "What happened to them shouldn't have happened to them. If there's something that you guys feel that way about that makes you say 'I shouldn't have said that...' Don't do what I did. Do the right thing, and say something about it." At the end of the speech, he went into an impromptu acapella of 'Hands Held High.' This is the first time since 2017.07.03 London that the song has been performed like this.

- Mike rapped the original demo verse in place of Chester's verse during the bridge of 'Sorry For Now.'

- In response to a fan, Mike talked about 'QWERTY' before 'In The End' and told the story about how the song was written and how it lead to false assumptions by fans about what Minutes To Midnight would sound like.

- Mike briefly restarted 'In The End' to change the sound of the keyboard.

- Mike went into the crowd during 'Papercut,' 'Good Goodbye/Bleed It Out,' and 'Running From My Shadow.'

- Before 'Make It Up As I Go,' Mike told all the females in the crowd that they'd need to sing K.Flay's part.

- Mike sang the first verse and chorus of 'Good Goodbye' before performing and second verse of 'Bleed It Out' over the instrumental. This differs from previous shows as he wouldn't normally do the 'Good Goodbye' chorus, but the crowd was already singing it loudly and he went along with it.

- 'I.O.U.' was not on the written setlist. Mike added it into the set last minute - he came out after the encore break and said "I'm calling an audible and adding a song to the set."

- During the bridge of 'Running From My Shadow', Mike crowd surfed into the crowd. After the song, he stuck around in the crowd to sign autographs and take pictures with fans for an extended period of time.

- After several festival and promotional appearances, this was Mike's first full solo headlining show as a solo act.

- Mike performed a soundcheck before the meet and greet started. He ran through a couple songs and tried experimenting with some different things, like trying to play pads during the bridge of 'Crossing A Line.' He also only performed the 'Papercut' portion of the 'Over Again/Papercut' mashup.

Comments: Missing 'Waiting For The End/Where'd You Go' and 'Good Goodbye/Bleed It Out' (the latter was livestreamed on the LPLive Twitter). Full source uploaded to YouTube on the night of the show. 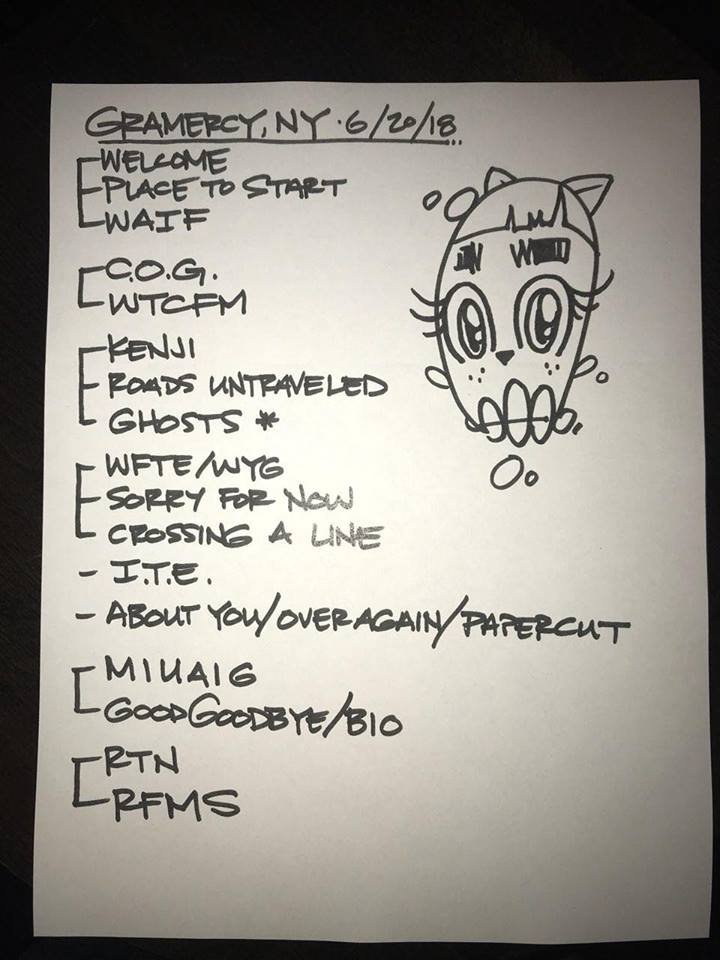