- Mike completely restructured the set from the show he played earlier in the day.

- 'Welcome' opened the show, this time with a brand new extended intro. The intro was not performed at the earlier show in Carson.

- Joe joined Mike for 'Castle Of Glass.' The intro was riddled with errors.

- Chester's vocals were sampled for the choruses of 'When They Come For Me.'

- Taka from ONE OK ROCK joined Mike for the 'Waiting For The End' and 'Where'd You Go' mashup. He performed 'Somewhere I Belong' with Linkin Park at the Hollywood Bowl show in 2017.

- After the second chorus of 'Over Again,' Mike went into a shortened version of 'Papercut,' where he rapped the first verse, chorus, bridge, and ending before going back into the end of 'Over Again.'

- Mike sang the first verse of 'Good Goodbye' before performing the chorus and second verse of 'Bleed It Out' over the instrumental.

- This was the first time Mike performed 'Place To Start' and 'Watching As I Fall.'

- A shortened version of 'When They Come For Me' was performed for the first time. Mike performed the song in a linear fashion before stopping just before the bridge.

- A different shortened version of 'Roads Untraveled' was performed for the first time. Mike played it without the guitar refrain after the first chorus. When Linkin Park performed it at the Hollywood Bowl, it was shortened without the ending.

- This was the first time the studio version of 'Kenji' has been performed. In 2015, Mike mashed it up with a remix of 'Castle Of Glass' during his Fort Minor sets.

- This was the first time 'Sorry For Now' has been performed in any form.

- Mike performed a soundcheck at noon before heading to Carson to perform at KROQ's Weenie Roast.

Location: Left side of stage, a few rows back 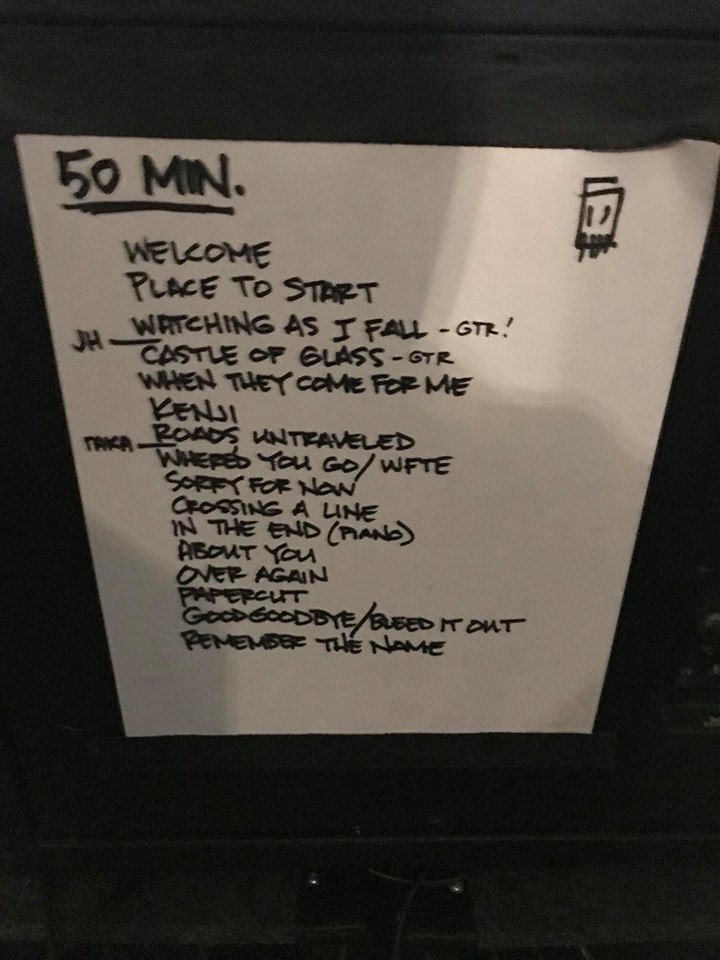