- Mike added more stage members to the live show for the first time. There were three backup singers, and members of Black Violin that played the violin and cello added to the band.

- 'Dolla' was moved up in the setlist from previous shows.

- 'Believe Me' had an extended outro tacked on to it, which stayed with the song for every single show the band played after this one. The outro includes a breakdown for the backup players to sing, as well as a fan sing-a-long part for the chorus.

- The day before the show, Mike posted on the Fort Minor MySpace blog that there would be a surprise near the beginning of the set, which turned out to be Chester.

- In an interview in December 2005 with Reuters about the new Linkin Park album, Mike said, "(Linkin Park) DJ Joseph Hahn came to our show in Los Angeles," Shinoda says. "He didn't even say hi. He didn't even say great show. He just walked straight up to me and said, 'Listen to me. When you go on stage with your side project, it can't be this good. You're not allowed. It's not fair.' He was obviously joking, but we do take a lot of pride in our show and I hope people can see it soon."

Comments: 'Enth E Nd' only. Incomplete - only about 3/4 of the song. Good audio. 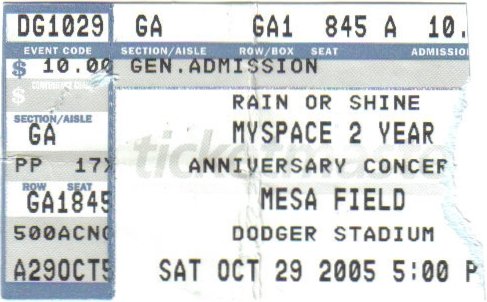