Lumen, Funeral For A Friend

- Mike put a Russian flag on his keyboard before 'What I've Done' that he kept for the rest of the show.

- The band brought a fan on stage to sing the bridge and ending of 'Bleed It Out' with Chester.

- The venue is not really a stadium, but is a field/green space for Saint Petersburg State Electrotechnical University, which is next door to the venue.

- For years we had a Source 2 listed for this show with specs (MiniDV: Panasonic NV-GS47; shot from VIP area), but in June 2014 this source was confirmed to not have ever existed.

Comments: Shot from VIP stands. There are several cuts during the recording. 'Given Up' is cut between the bridge and the outro, 'Points Of Authority' has a cut, and the encore break has a cut.

Comments: Shot from fan-zone. Includes video footage of the crowd after the show outside of the stadium. Recording starts at the end of 'Given Up'. Formerly Source 3, renamed to Source 2 in June 2014 (the real Source 2 didn't exist). 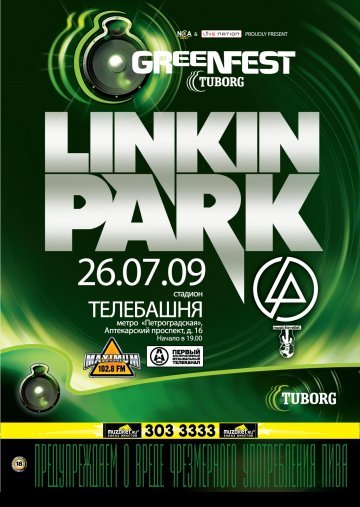