- Joe messed up on 'From The Inside' and played one of the verse samples during the break before the last chorus.

- 'Points of Authority' featured a new intro (called Intro #2 on LPLive). The music from the new intro was also used during the second verse of the song, in a similar manner to what was done throughout 2007-2008. Mike rapped verse one of 'Petrified' over the intro verse one of 'There They Go' over the outro.

- Mike messed up the lyrics during the last chorus of 'Points Of Authority'.

- For the 'Breaking The Habit' intro, the first part of the intro was new but the second part was the same piano piece that Mike used for the intro starting in the middle of Projekt Revolution 2007. The intro went straight into the song though, instead of Chester singing the first verse over the piano part before the song began like usual.

- 'Bleed It Out' featured a new drum solo intro from Rob, and a modified version of the extended outro. Instead of playing through the normal extended outro, stopping, and then playing the ending again in the "slow-fast" manner like they did in 2007-2008, they only played the outro once and sped up near the end of it, and ended the song there. The bridge was also not extended at all for the first time since early 2007.

- 'New Divide' featured the same short extended intro (the one droning synth note) that was used at the Transformers 2 premiere show.

- Mike had a Turkish flag on his keyboard. Chester carried it around the stage on 'Crawling'.

- This was the first Linkin Park show in Turkey. In 2008, it was rumored that they were going to play in Istanbul (even by Music For Relief), but the show never ended up taking place. However, the band made their debut in Turkey for the first show of the 2009 summer run.

Comments: 'Session' through 'Lying From You' shown via a center angle camera online (in 6 parts); Dream TV showed a 10 minute report with clips of 'Given Up', 'From The Inside', 'No More Sorrow', 'Crawling' and a full version of 'In The End'. Audio on both showings is mixed.

Comments: Full show; raw soundboard audio feed. Leaked on November 4, 2009 by a friend of LPUtkan's that works for Dream TV.

Comments: Full show. After 45 minutes, the taper changed his position and moved into the upper sections. Audio released in 192kbps mp3 format on LP-TR.com 2 days after the show.

Location: Right side, 30 yards from the stage 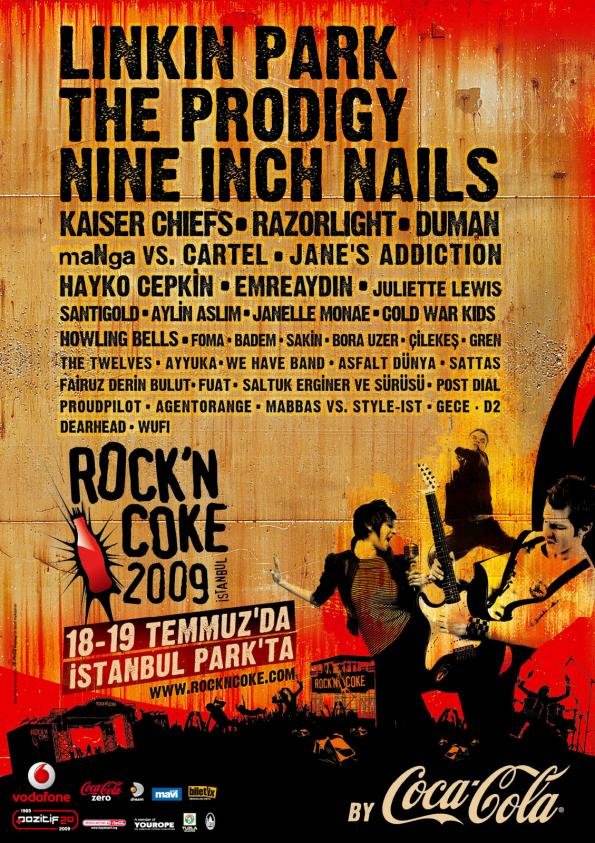