- 'What I've Done' was played with the long AMBO intro, and 'Faint' featured the extended outro. During one of the takes of the 'What I've Done' intro, right as it got to the climax, Mike's keyboard didn't work when he tried to play it. This prompted him to say "..OR NOT! JUST KIDDING!" and have the intro restarted.

- The exclusive performance was for four winners of a contest that Music For Relief and SocialVibe put on together. Winners were flown out to Los Angeles to meet the band and attend this special show. Just these four winners were in attendance for the rehearsal, which was for the Transformers 2 Premiere on the 22nd.

- Before the band rehearsed their show setlist, they played part of 'By Myself' (the first known rehearsal of the song since 2003), Mike performed a short 'Hot N Cold' cover (Katy Perry) on his Virus before Rob joined in jokingly, and Mike and Chester sang a small part of 'No Roads Left'. 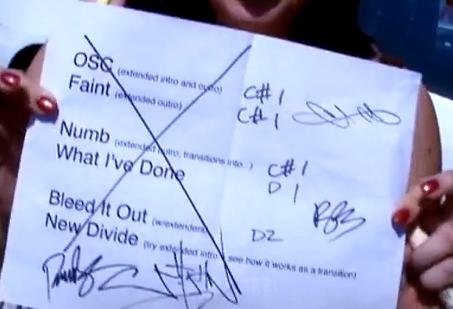