- Joe played a lot of gunshot samples at the beginning of 'Bleed It Out'. There was no drum solo on the song.

- Phoenix said that Chester actually had another accident before the concert, he cut his upper lip while playing tennis. Jasparina from LPTimes has a picture and was going to ask Chester about it, but didn't want to embarrass him. He hit himself in the face with a tennis racket and had to have six stitches. The LPTV Episode "SEA Tour 2007" reports also about this accident.

- There was no opening band.

Comments: This one is pretty obvious. There's a front-row video of this song on YouTube that shows when Chester starts playing his guitar part on 'Shadow Of The Day', no sound comes from the guitar, because he forgot to turn the volume knob up, and he doesn't realize it until the song is nearly over. This is magically fixed on the live audio release, with no problems with Chester's guitar being heard whatsoever! He even mentions it after the song, which isn't edited out on the live audio, making it even more obvious that this has been fixed up. Also, during 'Points Of Authority' at this show, Chester went into the crowd, and rowdy fans grabbed at him, breaking his necklace and grabbing the cast on his broken wrist. Chester then ranted about it for about a minute before the next song, 'In Pieces', saying things like "Stealing my jewelry, breaking my hand, you should be ashamed of yourselves!" There's a YouTube video that shows all of this, but it has been entirely edited out of the live audio release.

Comments: Incomplete. 'Given Up', 'In Pieces', 'Shadow of the Day', 'Pushing Me Away', 'Breaking the Habit', and 'Little Things Give You Away' only. SBD audio.

Comments: Interview with Brad and Phoenix and clips of 'Given Up' and 'No More Sorrow'. 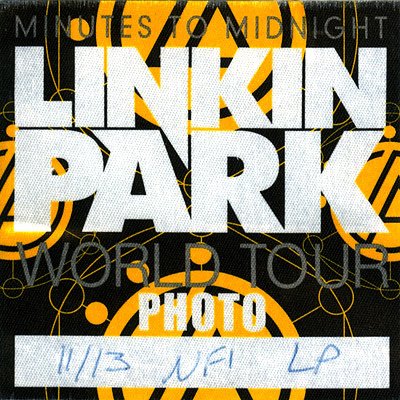