- Chester broke his wrist on the beginning of 'Papercut' by jumping off the top of the stage, catching his foot, and falling (video here). He continued to sing (with the crowd helping him on some parts) from 'Papercut' to 'Leave Out All The Rest', then only left to get checked on and get ice on it before 'Numb'. He came out and finished the set - only after the show did he go get a cast put on it. He didn't want to quit the show early or cancel any other shows or Meet & Greets. It sounds like he mentioned something to Mike about it before 'Leave Out All The Rest', so the band stopped the show and took a few minutes after the song for Chester to get it checked out backstage. During the break, Brad, Mike, Joe, and Rob played a short instrumental jam. Chester came back out and finished the rest of the show.

- Mike rapped verse one of 'In Stereo' over the intro of 'Points Of Authority'.

- 'Shadow Of The Day' was not played, because Chester's wrist was broken and he plays guitar on the song. Starting with the show after this, Mike's tech Kurt played guitar on the song for the rest of the Australia Tour.

- After 'From The Inside', Mike took time to talk about how hard it is always being on the road and away from your family all the time, and then had the crowd sing Happy Birthday to Ken "Pooch" Van Druten, the band's FOH engineer for the Minutes To Midnight Touring Cycle. Videos of this can be seen on YouTube (Video 1, Video 2, Video 3).

- The crowd started cheering for Chester when he came back on stage from the encore break for 'The Little Things Give You Away'. 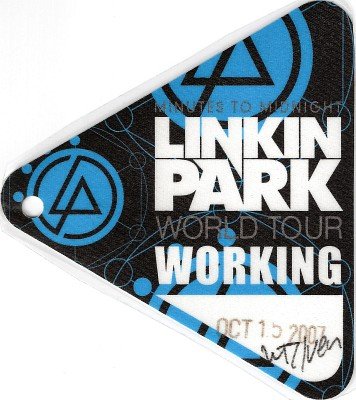 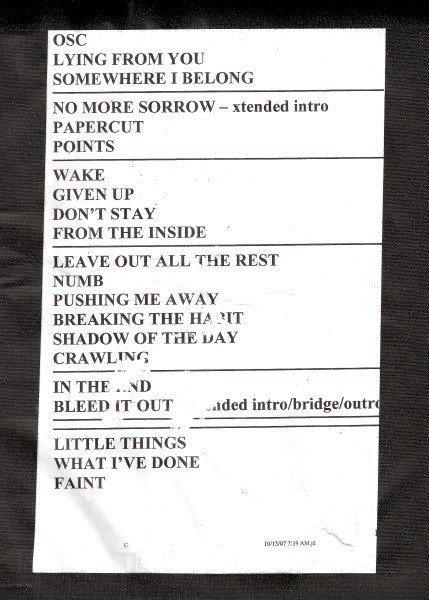