- Chester messed up the lyrics to 'Don't Stay'.

- Joe missed a sample on the beginning of 'Numb'.

- The band didn't introduce 'QWERTY' at this show...instead, Mike just said, "New song, here we go" during the intro.

- The band joked around a lot at this show... Chester and Mike called each others' names after 'Points Of Authority' and 'Runaway'; Chester continually acted like he couldn't hear Mike throughout the show. After 'Numb', Mike’s wife Anna took his guitar out to him which took Mike by surprise and he jokingly introduced her as his new guitar tech.

- The bridge of 'Reading My Eyes' was extended at this show, the only known time the bridge has been extended.

- Mike said that 'Faint' is one of his favorite songs to play live.

- Mike played a part of 'Mary Had A Little Lamb' on keyboard after 'Crawling'.

- Before 'My December' started, Chester said that he wouldn't play the song unless his micstand was brought on stage. After waiting and kidding around, Jason LeMiere finally ended up bringing it out. Mike started the song, but then Joe ran on stage with another one right after Mike had begun, causing Mike to restart the song and say "Can we play this song seriously now? Seriously? Don't clap though."

Comments: This recording was uploaded within a day of the show in full, titled "LINKIN PARK - 2006.08.15.mp3". No information on the source or if a lossless version exists has ever been found. 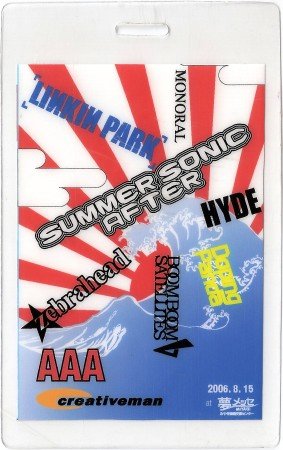