- This was Linkin Park's first show performance of 2006 and was considered the "warm-up" show for the Summer Sonic dates that followed that weekend.

- 'With You' featured a new intro - a shortened version of the intro used to open the show on the Meteora World Tour in 2004.

- This was the first known time that Linkin Park performed the Xero song 'Reading My Eyes'. The band at the time said that they had to download an mp3 of the song from a fansite to rehearse. Once they started rehearsing, it all came back together quickly and they decided to play it.

- Chester started singing the 'Crawling' chorus vocals on the long Reanimated intro for the first time at this show.

- This was the first time that Mike played a stripped-down "piano version" of 'My December'. He also added a piano outro to 'Breaking The Habit', featuring Chester singing the chorus.

- For the first time ever, 'One Step Closer' did not close the show and was replaced with 'Breaking The Habit' as the band's last song.

- This was the first performance of 'QWERTY'. To prepare for their short summer tour, the band worked on new song to play live entitled 'Grecian'. At the last minute during rehearsals, Phoenix brought in an idea for a new song, which turned out to be 'QWERTY'. Lyrics were finalized on the flight to Japan by Mike and Chester and they ended up picking this song to play live. A reworked studio version (with changes recommended by Rick Rubin) was released on LP Underground 6.

- This was Linkin Park's first performance of 'Reading My Eyes'. Xero had performed the song at some point in 1997 and/or 1998 based on comments made by the band around the time of these Japan shows. After downloading the song on a Linkin Park fansite, "the song came back to them" and they rehearsed it for this short tour.

- This was the first time that the piano version of 'My December' was played live. 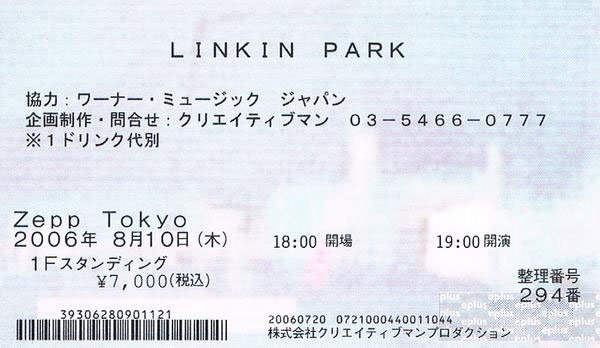 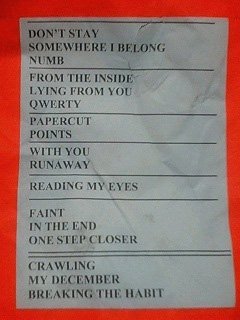