No Doubt, *, Jurassic 5, Story Of The Year, The Crystal Method, Camp Freddy

- Linkin Park and Jay-Z played a 50 minute set, opening for No Doubt.

- After 'Runaway', Mike and Chester talked about the cause for the show. The intro to 'Frgt/10' was started but Mike wanted it stopped to finish talking. Chester said, "Fuck it let's play a song", the intro was restarted and Mike replied with "We've never played this song live". Chali 2na joined them for the song for his verse, exchanged shoutouts with Mike afterwards and then Mike played a keyboard piece over the end of the song. This is the only time the band has ever played 'Frgt/10' live.

- On the 'Dirt Off Your Shoulder/Lying From You' intro after Mike's verse, the band completely stopped for about 10 seconds, the lights went down and Jay-Z came out before they continued the song.

- 'Izzo/In The End' was performed like it was at The Roxy - after the 'In The End' verse, the band stopped to let the crowd sing the rest but they just screamed, prompting Mike to laugh.

- During 'Jigga What/Faint', Mike had problems with his in ear monitors. He stopped the show for a minute after the song and went backstage, causing Brad to perform a short guitar intro to 'Numb/Encore'.

- Jay-Z gave Music For Relief a shoutout on the 'Numb/Encore' intro.

- Before the last song, Chester got the crowd to say "Hi Blink!" (since Blink 182 canceled their appearance at the show) and made a joke about them.

- This was a benefit show that Linkin Park created for Music For Relief and its efforts in southeast Asia after the 2004 tsunami. LP invited their friends in other bands to play the show.

- The evening also featured special educational video presentations about the disaster and relief efforts including a video documentary of Chester's recent visit to Phuket, Thailand and the outlying disaster area in Asia.

- Ozzy Osbourne was scheduled to appear, but due to a reported family emergency, he was unable to make it. Blink-182 were also supposed to perform, but dropped out with no explanation and only a couple of hours' notice.

- Clips of a cell phone recording exist by JonandBT from LPFuse.

Comments: Short clip of 'Dirt Off Your Shoulder/Lying From You' leaked online by Mark Fiore. Other footage of 'Somewhere I Belong', 'Runaway' and 'Numb/Encore' can be seen in various Artisan News / Getty / Roo TV video clips of the band. The full proshot is not available to the public. 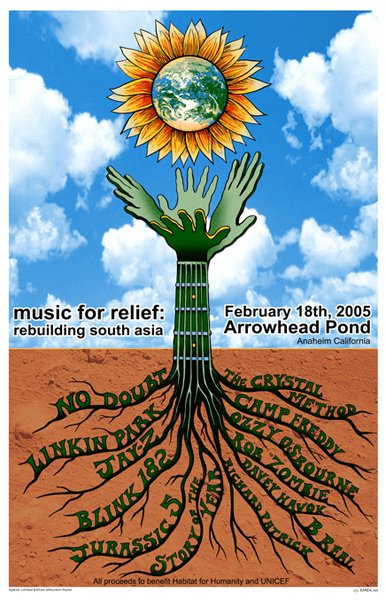 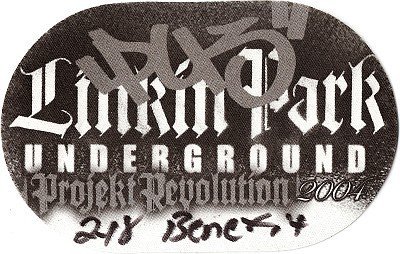