- This was Linkin Park's first show in Indonesia.

- The band ignored travel warnings by the United States government to Indonesia and played the show. Due to the warnings, Missy Elliot, Limp Bizkit, and Gareth Gates all cancelled shows in Indonesia in the summer of 2004. The promoter of this show, Nephatya, stated that Linkin Park did not cancel because Indonesia at the time stood as the largest market for the band in Asia. Chester said that the band would be starting the show at 4:00pm in the afternoon because they were concerned about female fans traveling home after the show.

- There was no opening band at this show. Instead, a local DJ (name unknown) performed for about 40 minutes. 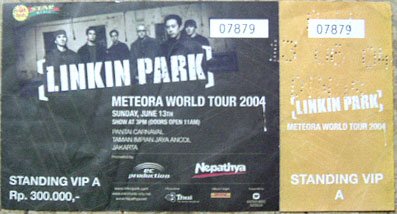