- Brad's guitar cut out during the first part of 'With You'.

- After 'By Myself', Mike talked about how the band was letting all military personnel stationed near a venue on the tour come to the show for free due to current situations (the Iraqi war, etc).

- Mike gave a shoutout to Rocky Rock and Supernat, two acts that played earlier that day, after 'Hit The Floor'. He also mentioned all of the other bands on the bill: Blindside, Xzibit and Mudvayne.

- This was the first ever performance of 'P5hng Me A*wy'. Mike introduced it as "something special".

- Christian, the lead singer of Blindside, sang the ending of the song and came out again on 'One Step Closer'.

- 'Nobody's Listening' was extended and Xzibit rapped a verse from 'My Name' over it.

- This is the only known show of the tour with this setlist. It is assumed (but not known for sure) that the band changed it right after this show.

- This was the first performance of 'P5hng Me A*wy' and 'Nobody's Listening'.

Comments: Cut between 'Easier To Run' and 'A Place For My Head'. 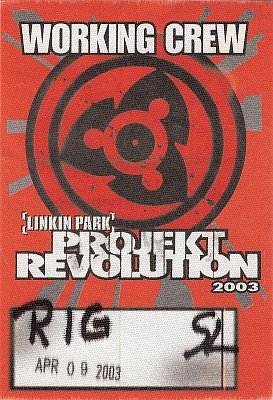