- Before 'A Place For My Head', Chester said the fans brought him out of the "shithole" he was in earlier in the day. In December 2014, a review of the show was found from BBC with some interesting information about Chester: "Linkin Park performed at Rock City in Nottingham last night (Monday), despite the lead singer hurting his hand just minutes before going on stage. There were about 1000 fans there and the band played tracks from their new album 'Meteora' due out later this month. Chester Bennington, the lead singer, took his shirt off to show off his skinny tattooed body - much to the approval of the girls in the crowd. Ten minutes before the gig he punched the dressing room wall and badly bruised his hand. He had to keep an ice pack on it but told us he wasn't fazed by his injury:

"My hand doesn't matter, you can cut it off for all I care. As long as my voice works."

"If I lost all feeling from my neck down, if you could string me up and I could sing, I'd be there doing the shows."

"The fans come first and the shows come first too and that's all that matters to us. We really don't care about anything else except for the music and the kids.""

- This was a private show by BBC Radio 1. During "UK Week" (a promo for LPU members and LP fans) by the band, the LPU offered tickets to Nottingham, London, Top Of The Pops, Manchester, and CD:UK/Headliners. The Nottingham show was "event #2" on the list with no description (no date, time or location), but LPU'ers were allowed to enter for tickets and if they won, they were notified of the date, location, etc of the show. A small Meet & Greet was held before the show, but the LPU'ers were encouraged to enter to win M&G's for other shows in the UK that week, presumably to not fill up the Nottingham M&G with a lot of fans. To gain admission to the show, either you won tickets from the LP Underground or via BBC Radio 1.

- The announcement of the show by BBC said, "To celebrate the launch of their incredible new album 'Meteora', Linkin Park will be playing a gig exclusively for Radio 1 at Nottingham's Rock City Monday 3rd March. Lamacq Live on March 3rd will bring you a Linkin Park Special with a headline set, backstage interviews & reveiw live from Nottingham. All this week Jo Whiley, Lamacq Live, the Rock Show and Colin Murray will be giving away tickets on air on BBC RADIO 1. Your last chance to get hold of a pair of tickets to the gig will be on Saturday March 1st during Scott Mills show when Colin Murray will be roaming the streets of Nottingham looking for deserving fans to give the few remaining tickets away."

- The first public recordings of the new Meteora songs came from this show ('Don't Stay,' 'Somewhere I Belong,' 'Lying From You,' 'Faint,' and 'From The Inside') via the online webcast and the radio broadcast. 'Hit The Floor' and 'Easier To Run' were cut.

Comments: 48 kHz. Includes an 8 minute interview with Mike. Missing 'Hit The Floor' and 'Easier To Run' which were not broadcasted.

Comments: Slightly better quality. Missing 'Hit The Floor' and 'Easier To Run' which were not broadcasted.

Comments: 'Somewhere I Belong', 'Faint', 'From The Inside', 'In The End', and 'One Step Closer' only. Includes interviews with the band recorded at the Wiltern 3-24-03 and select studio tracks from Meteora.

Comments: Superior quality. Released on LPLive on January 25, 2013. Missing 'Hit The Floor' and 'Easier To Run' which were not broadcasted. 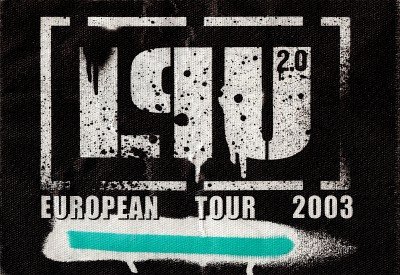 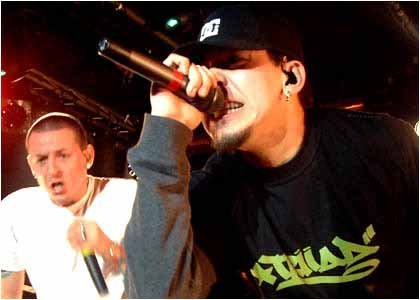 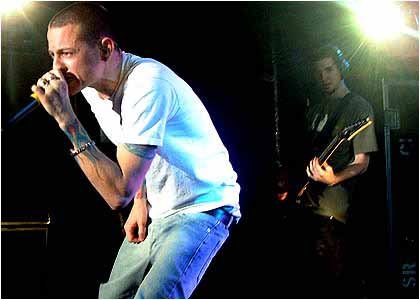 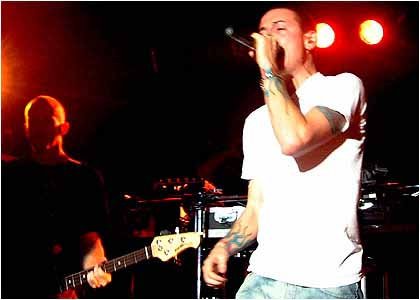 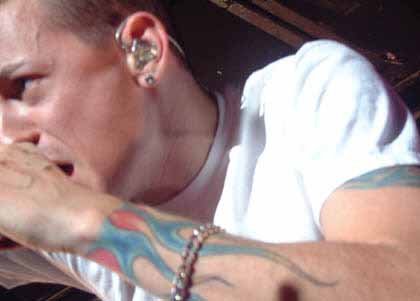