- Chester messed up the lyrics of 'Runaway' and started singing the 'Rnw@y' verse two lyrics "under a sky of grey" before he corrected himself.

- This show was the official rescheduled date for the canceled show on September 11, 2001.

- Snippets of the show were shown on the MTV Masters 2003.

- Thanks to Chesterchaz for the covers.

Comments: 'From The Inside' only. Released on the 'Numb' (CD 1) single. Also included in the initial iTunes release of Meteora.

Comments: Muffled sound till the middle of 'Lying From You'. Liberated Bootleg: 'Meteora Hamburg' - Cover: Front | Back | CD 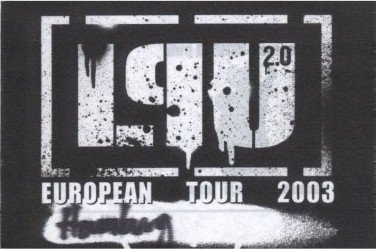