- The band is listed as Xero 818 on the flyer. Talking to Kerrang! in 2020, Brad explained they started using this name because there were already other bands named Xero.

- The flyer is the cover of N.W.A.'s debut studio album "Straight Outta Compton" with one extra person: Mike's dad.

- This date came from Mike's wife Anna. On July 24, 2013, she posted an article on her blog entitled, "College, Sunset Strip, and Meeting Mike", which included some old Xero posters and a ticket stub. When we asked her for closer pictures of these items, she happily obliged and sent them to us. A grateful thank you goes out to her for submitting this information!

- Andy Gould (who was partners with Rob McDermott, Linkin Park's future manager) was in the audience. McDermott couldn't make it to the show. In an interview to Brighton Lee Sagal in front of the venue Andy Gould said: "Came here seven years ago with Rob McDermott, my old partner. We saw a band called... what they're called? Xero. X-E-R-O. Changed their name to Hybrid Theory, changed their name to Linkin Park. Played in front of ten people here. I was [managing Linkin Park] for a time. But sometimes you just see, you know, you see the [talent]. And it was Rob McDermott. So I stood there like 'I don't know if this band is good or not' but he believed that passion was talent. Got that wrong every time."

- Styles Of Beyond played across the street at the Whisky a Go Go. Once their show was over, they went to The Roxy to watch Xero.
- If you happen to have or know a full or partial setlist for this show, please let us know! 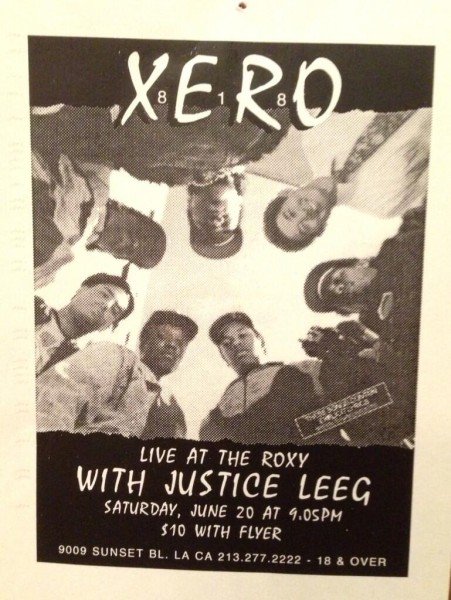