- Xero opened for System Of A Down. This show in general is pretty interesting from a historical standpoint. System Of A Down was still a local/regional band (although a pretty well-established one) in 1997, in fact the period they were playing shows at places like the Whisky and the Viper Room was around the time they started getting major label attention (they were ultimately signed by none other than Rick Rubin that year), and SX-10 would have just formed not long before this show as well...it may have even been THEIR first show too. Mike said in one of the Sunset Strip Music Festival 2013-related interviews that Xero played four out of their first five shows on Sunset Strip.
- In the HBO Reverb airing from the 2001 London Docklands show, it said that this very first show got the attention of Jeff Blue, who worked at Zomba Music at the time. He saw that they had potential but they were pretty far from actually "making it" so they got a little financial support from Zomba at the time. Jeff later said that he went on to see Xero play several shows after this to mostly empty venues with almost no one in attendance.
- In a 2010 article published by NME, Mike described the show, “I remember that gig. I was wearing the most ridiculous thing ever. I had this white beanie hat on with blue goggles and white gloves, I think because it made me feel more like a performer and not the normal dude that I knew I was. So I had to get into costume in order to get psyched up and get into character. We were awful, just horrible but we survived.” Jeff Blue addressed this on his "One Step Closer: From Xero to #1: Becoming Linkin Park" book. He heard an audience member say Mike looked like a smurf. Jeff thought the performance was raw and energetic and that the band had potential but the audience lost interest about two minutes into the show. He wrote the following notes on a napkin: "Vocals off key. Awkward stage presence. Decent songs. Didn't connect with the audience."

- Jeff Blue's book mentions 'Rhinestone' was recorded shortly before the show for inclusion in the cassette tape with the baby cover.
- In a 2013 interview with Rolling Stone, Mike said, "Our very first show there we opened up for SX-10, with Sen Dog from Cypress Hill, and System of a Down. I remember really vividly that I had seen System play there before. It was the era where Incubus played there all the time, System played there quite a bit. And we played our set, which was probably 30 minutes at the time, and it was all friends. Nobody had even heard our music – they were there just to support friends. After SX-10 performed, System of a Down's set was memorable for other reasons. It turned out that a couple of the guys had smoked weed with Sen backstage and got laid out. They were incapacitated. They were two hours late to start their set because some of them were just, like, unable to function." Mike also mentioned this at the 2007 LA Club Ritual show when he said System Of A Down didn't go on "until like 1:00 in the morning" because "Daron was knocked out backstage." 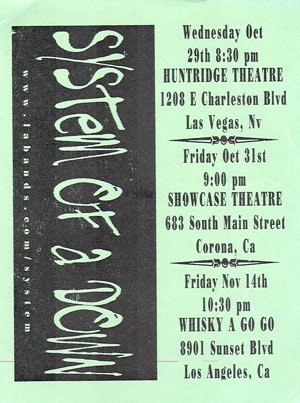 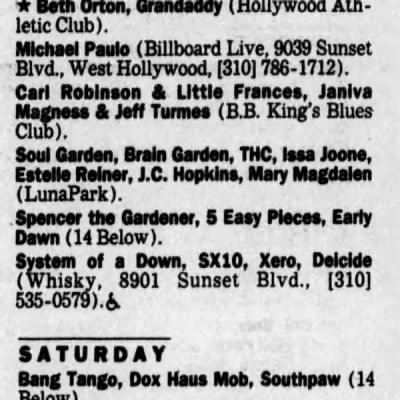