- Dan was not present at the show. He flew to Israel to perform at the Meteor Festival with his band Tatran that day. This was the second time Dan had left mid-tour to perform (flying to Israel and back between Leeds and Köln earlier in the tour) and the first time he's missed a show since joining the crew. Matt's setup was on the right side of the stage where Dan's drumkit would typically be set up.

- Mike reordered the setlist again, moving 'Castle Of Glass' down while moving 'Hold It Together' up.

- Mike played with the samples at the end of 'Hold It Together.'

- Mike rapped the demo verse of 'Sorry For Now' over the extended bridge for the first time since 2018.08.07 Kowloon City, Hong Kong, as Dan wasn't present to perform the drum solo.

- Matt left the stage before 'Numb' and returned halfway through 'Over Again.'

- Unlike recent shows, Mike played shortened versions of the piano medley songs like he did originally when he first started playing them. He ran through the first verses and chourses of 'Numb,' 'Heavy,' and 'Burn It Down.'

- 'Introduction,' 'Petrified,' and 'I.O.U.' were all on the setlist to start the encore but were dropped so Mike could take several requests.

- Despite it being last in the poll he posted on Twitter (see Other Notes), Mike still performed the live version of 'Cigarettes.' This is the first time he played the song at a show since 2015.09.08 London, England. He soundchecked the song at 2018.09.03 Stockholm, Sweden.

- 'Until It Breaks' won the poll and was performed after 'Cigarettes,' the second time the song has been performed on the tour (the first being at 2018.08.29 Köln, Germany).

- After 'It's Goin' Down,' Mike whined, "Why did I ever write a song with so many words?" He then said "This song is about math" before going into 'Remember The Name.'

- Mike went into the crowd during 'Running From My Shadow.' The song was performed without its normal extended outro due to Dan not being at the show.

- This was the first time 'In Stereo,' 'Cigarettes,' and 'It's Goin' Down' were performed on the Post Traumatic Tour. The latter two were soundchecked earlier on the tour.

- Before the show, Mike posted a setlist poll on Twitter, asking fans to vote for a song to be added to the set: "I cant decide which of the following songs to put in the set tonight in Vienna. Which should it be?" The choices were 'Until It Breaks,' 'Cigarettes' (Live Remix), 'Kenji,' and 'It's Goin' Down.' 'Until It Breaks' ultimately won.

- 'In Stereo' was part of a setlist poll Mike held back in May, which also included 'Sorry For Now,' 'Roads Untraveled,' and 'Petrified.' With 'In Stereo' being performed, all four of the songs from the original setlist poll were performed on the tour.

Comments: Full show uploaded as separate videos to YouTube the day after the show.

Location: A couple meters in front of sound board, centered

Comments: Full show released by the taper on LPLive on September 14, 2018.

Location: left side, about 10th row

Comments: "turned out a quite good quality recording, but sometimes I sung along so loud, so there are couple songs in the last third of the show that I patched from my camera's audio (AC3 38kbps from Panasonic HC-V770), mixing with the H2 recording." - Taper. Full show released by the taper on LPLive on September 16, 2018.

Location: left side, about 10th row 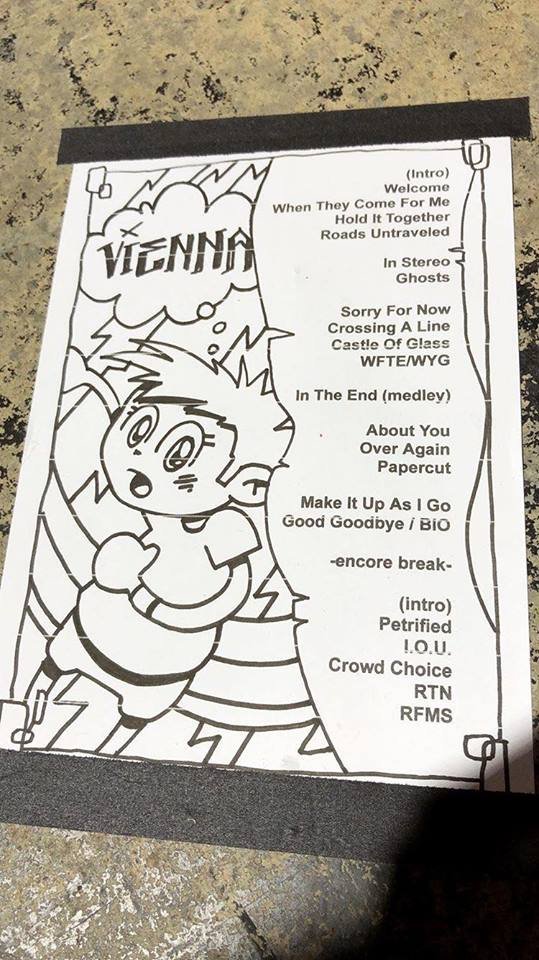 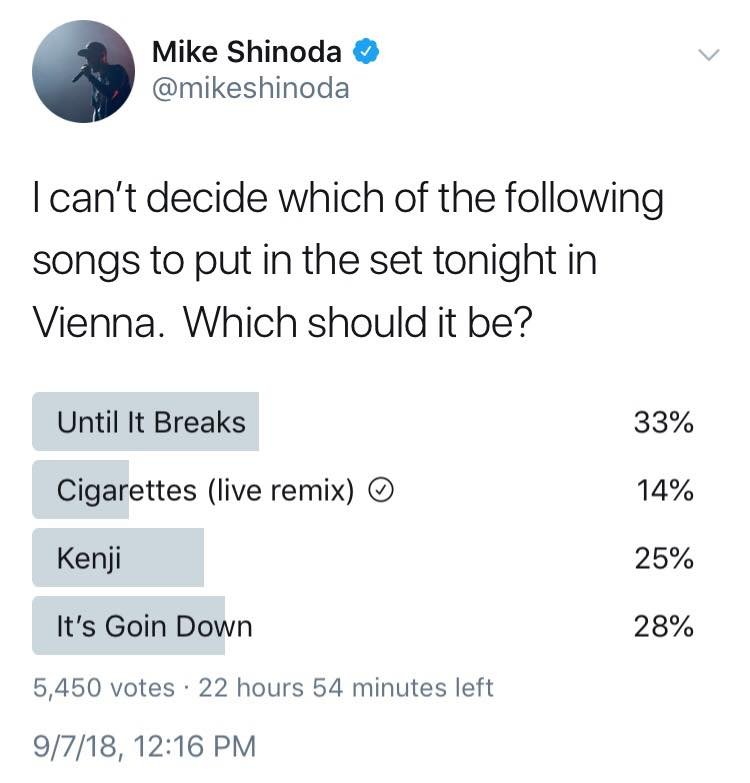