- Because ONE OK ROCK didn't perform at the Tokyo show, Mike had more time to perform than he did at the previous show in 2018.08.18 Osaka, so the set was extended.

- Instead of performing with a traditional stage setup, Mike performed in front of a giant tarp that had the cover of Post Traumatic on it.

- After being absent from previous non-headlining festival sets, 'When They Come For Me' was performed.

- Mike led the crowd in a piano and acapella singalong of 'Waiting For The End' after the 'Waiting For The End' and 'Where'd You Go' mashup. This version is similar to the intro he did for the song at the 2017.10.27 Hollywood Bowl tribute show, and is an extension of the acapella version he had played at the show in 2018.08.16 Chengdu, China.

- During the piano intro of 'In The End,' Mike talked about when he first met Chester when he auditioned for Linkin Park.

- Mike spoke in Japanese before 'Make It Up As I Go.'

- Mike wore a Pikachu hat he got from the crowd during the 'Good Goodbye' and 'Bleed It Out' mashup.

- Mike's performances at the Summer Sonic festival in Osaka and Tokyo were the very first shows he announced he would be performing on the Post Traumatic Tour.

Comments: Uploaded to YouTube on August 23. Missing 'Introduction,' 'Petrified,' 'About You,' 'Over Again,' and 'Papercut.' Smooth transitions between songs.

Comments: Aired on October 8th. 'Crossing A Line', 'In The End', 'Make It Up As I Go', 'Remember The Name', 'Running From My Shadow' and interview. Posted on Sharemania.us. 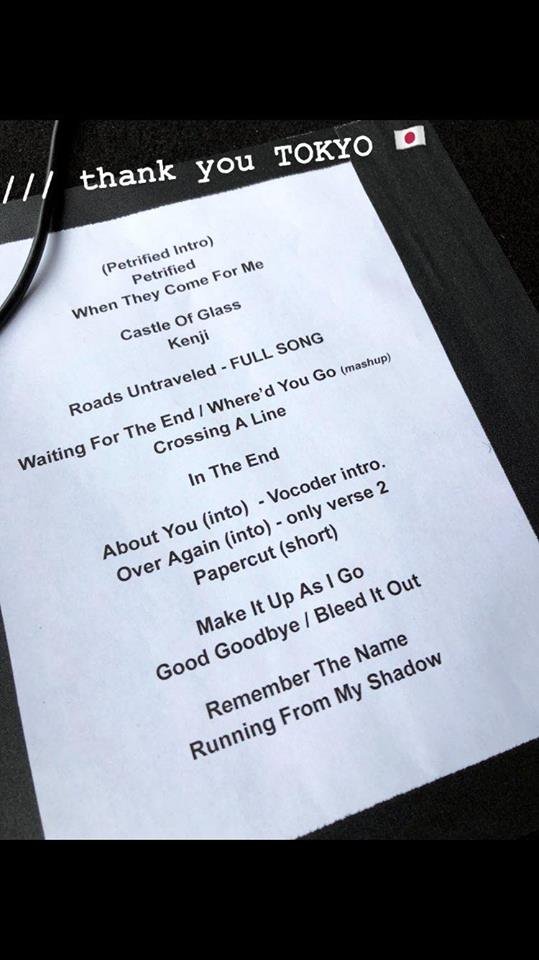