- After 'Watching As I Fall', Mike talked about the fan in the front row who won a Golden Ticket, who also had a birthday that day. He said he would draw all over the guitar after the show for the person.

- 'Castle Of Glass' was performed in a new style with piano. Mike said he was playing with the song leading up to the show.

- Introducing 'Ghosts', Mike said that the song was not about Chester specifically or actual ghosts. He said if fans wanted to shoot videos with sock puppets to the music, to tag him on Twitter.

- 'About You' transitioned into 'Over Again' after the second chorus. Mike went straight into the second verse this time, shortening the mashup by dropping the first verse and second chorus. In an interview later on, Mike explained that he did this because he noticed the energy became sadness during that part of the show and he wanted to make sure it kept flowing.

- Mike sang the first verse of 'Good Goodbye' before performing the chorus and second verse of 'Bleed It Out' over the instrumental.

- This was the first time that 'Ghosts,' 'Make It Up As I Go,' and 'Running From My Shadow' were performed.

- This was the first time 'Castle Of Glass' was played piano style.

- This was the first time a shortened version of 'Over Again' has been performed.

- The LP Underground did a contest for a Meet & Greet with Mike and entry to the show for 50 fans.

- Fans lined up starting the evening before the show to be one of the first one hundred in line. The 100th person received their wristband around 2:45am.

- To celebrate the event, Mike set up a merch vending machine outside of Amoeba Records with exclusive event merch including a shirt, a hat, and a sticker pack. Included were several "Golden Tickets" for fans to obtain, which were redeemed by emailing "gold@mikeshinoda.com" to receive a signed Post Traumatic album from him. One fan won a signed guitar that Mike drew all over at the Meet & Greet after the show.

Source 0: Video - PROSHOT (Mike Shinoda)
Time: 29:48 mins
Comments: Released on Mike Shinoda's YouTube channel in 3 parts as the "Post Traumatic /// Album Interview" series. 'Welcome', 'Place To Start', 'Watching As I Fall', 'Ghosts', 'Crossing A Line', 'In The End', 'Make It Up As I Go' and 'Running From My Shadow' only. Includes interview footage.

Comments: Cut between each song. Missing some footage but includes most of show. Uploaded to YouTube. 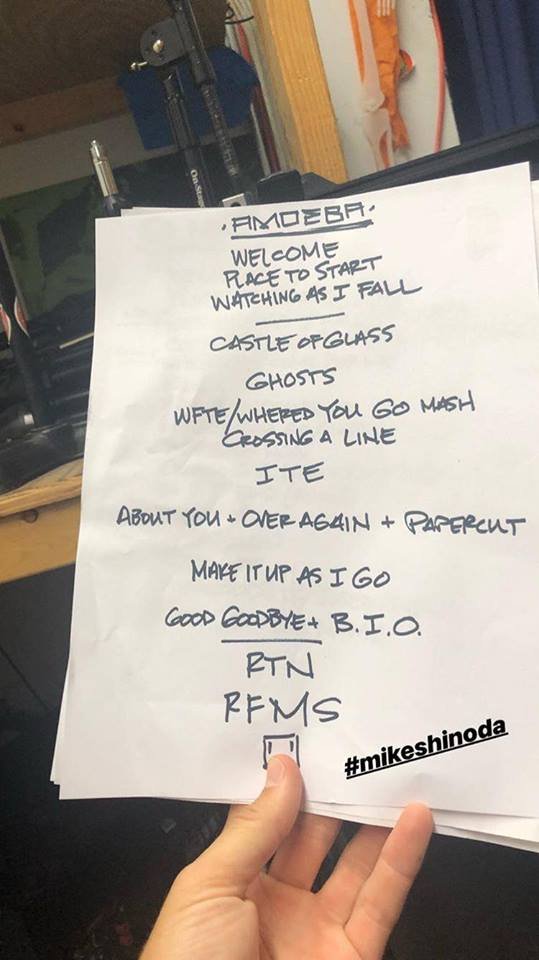