- The Backalley was opened from 1997 to 2001, then closed, then reopened as The Alley, then closed around 2008-2009. The venue should not be confused with The Back Alley Bar & Grill that is a totally different (and unrelated) club that is currently situated on the same street.

- This show was added to the live guide in September 2016 after the discovery of news clippings from November 1999 advertising the show. It was, however, addressed in a few different sources several times before that. The LATimes article from December 1st, 2005 titled "Age-appropriate entertainment" mentions: "This is actually the second go-round for Barnum's club. He ran the Backalley at this same locale from 1997 until 2001, booking mostly weekend shows (some which wound up being more historic than others, like the night when then-unknowns Hoobastank and Hybrid Theory -- later to become Linkin Park -- shared a bill)".

When rockrevoltmagazine.com asked members of Boy Hits Car about their best memories of them teaming up with big names in music industry over the years, the band members also seemingly recalled this show: "Supporting Stone Temple Pilots in Europe, playing festivals that were headlined by names like Iggy & the Stooges, Eminem, or The Prodigy, gigging at LA clubs in the mid 90’s with bands like Incubus, System of a Down, and Linkin Park before they really broke, then supporting em all years later, generally sharing stages with so many great artists and bands in general…".

Kundalini's bio on their Soundcloud page reads: "Originally formed in Nashville, Tennessee with Danny's brother Marcos on bass and Brian Rhodes singing, after a short period of time the band decided to relocate to Southern California. Ian Horak and Damian Young both played bass at various points in their history and the band enjoyed playing with several prominent bands of that time period such as: Hybrid Theory (Linkin Park), Papa Roach, Hoobastank and Alien Ant Farm".

- "Hoobustank" was the actual spelling Hoobastank went with at the time. 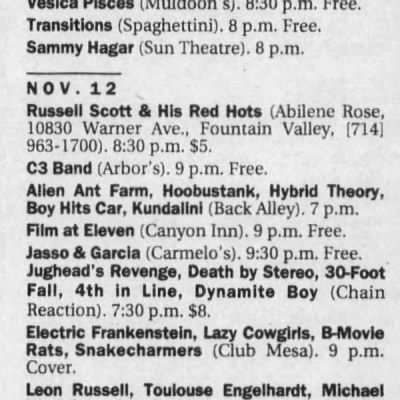 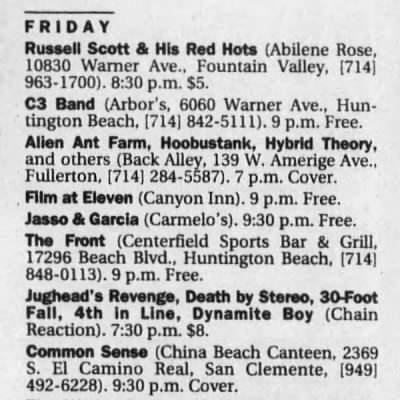